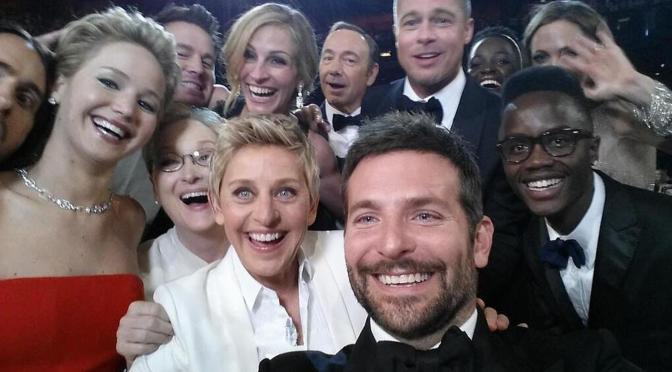 The 2014 Academy Awards are now over.  After a pre-awards season of prognostication and prediction, anticipation and apprehension, and universal love for the Frozen phenomenon, the results are in and, short of a few surprises in some of the categories that do not espouse as much water cooler hashtag chatter, winners were mostly what we expected.  Frontrunners like Matthew McConaughey and Lupita Nyong’o held off late surges from competition, foregone conclusions (as we were told) like Cate Blanchett and Jared Leto confirmed the power of inevitability, and Best Picture heavyweights 12 Years a Slave and Gravity split the Best Picture and Best Director (Alfonso Cuarón!) categories as many suggested they would.

As we all know, the awards are just the icing on the cake-like deliciousness that can be the Oscars telecast and last night was no stranger to the creation of lasting cultural memories.  Here is the good, the bad, and the (rampant) unintentional comedy of the 86th Academy Awards experience.

Alfonso Cuarón won Best Director for Gravity: The Oscars culminate a year in movies and every year you hope there are a number of pictures and performances that deserve to be at the gates of this celebrated identifier of movie immortality.  Some years awards are handed out to people that either may not be as deserving or pictures that are soon forgotten (I am looking squarely at you, Crash.  You are not getting by me either, The Artist.).  Other years, there are many deserving winners (Pulp Fiction and The Shawshank Redemption both lost Best Picture to Forrest Gump), so that any way the results go can be at least a little bit satisfying.  I went into last night understanding that there was top-heavy quality in this year’s group of movies, artists, and performances and some results, despite not aligning with my desires, would still be deserving.  For me, two nominations stood out in this fray of subjectivity: Leonardo DiCaprio’s nomination for Best Actor in The Wolf of Wall Street and Alfonso Cuarón’s nomination for Best Director for Gravity where nothing short of a win would be a gross injustice (a relative term – these are only awards).  This is not to take anything away from Matthew McConaughey (an incredible performance in his own right) or deserving directors like Steve McQueen or Martin Scorsese, but DiCaprio and Cuarón’s work last year represent the absolute apex of artistic possibility and expression from two men who have already established themselves as two of the best at their craft working today.  It was justice for Alfonso Cuarón’s direction to be honored with an Academy Award.  If voters are going to get one thing right, this bestowment is where you must begin.  (More on DiCaprio’s loss in a bit.) 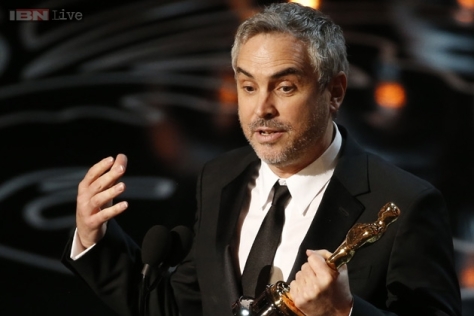 How either 12 Years a Slave or Gravity could have won Best Picture: These are two exceptional motion pictures, and although Gravity was my sentimental favorite, you cannot go wrong either way here.  It was a joy to watch Steve McQueen’s boyish exuberance onstage and I found that my initial disappointment dissipated rapidly.  12 Years a Slave is a brilliant work on subject that is essential to tell well and correctly, and Mr. McQueen and Mr. Pitt, aided by an incredible group of actors, did just that. 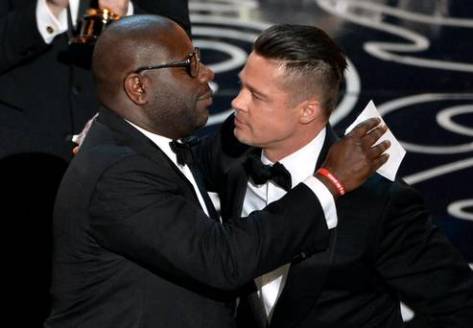 Lupita Nyong’o and Jared Leto’s speeches: Both deserving supporting actor winners were all class in their acceptance speeches.  Nyong’o’s extraordinary words of acknowledgement (“It doesn’t escape me for one moment that so much joy in my life is thanks to so much pain in someone else’s. And so I want to salute the spirit of Patsey for her guidance. And for Solomon, thank you for telling her story and your own.”) and inspiration (When I look down at this golden statue, may it remind me and every little child that no matter where you’re from, your dreams are valid.) typified what seems to becoming a universal industry truth: she is really something special.  Leto’s salute had a similar resonance, focusing so eloquently on his mom (“In 1971, Bossier City, Louisiana, there was a teenage girl who was pregnant with her second child. She was a high school dropout and a single mom, but somehow she managed to make a better life for herself and her children. She encouraged her kids to be creative, to work hard and to do something special. That girl is my mother and she’s here tonight. And I just want to say, I love you, Mom. Thank you for teaching me to dream.”) and on the population of people that were and continue to be so impacted by the struggle his character faces (“And this for the 36 million people who have lost the battle to AIDS and to those of you out there who have ever felt injustice because of who you are or who you love, tonight I stand here in front of the world with you and for you.”) in Dallas Buyers Club. Both moments were definitive highlights of the night. 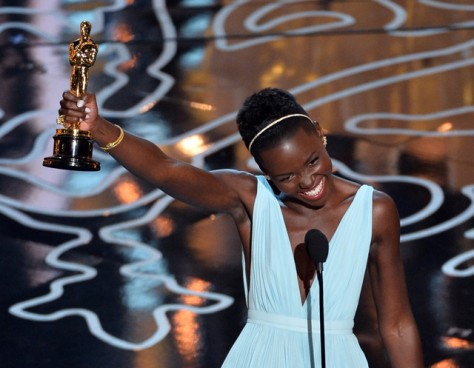 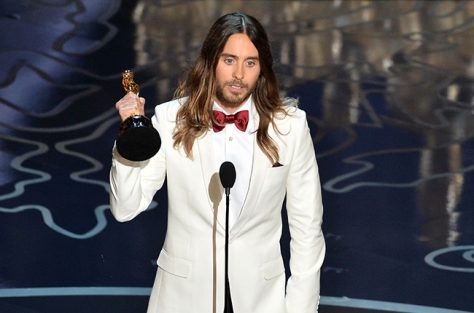 Spike Jonze won Best Original Screenplay for Her: As I explained in my 2013 Year in Movies column and in 5 Things, Her is a special picture and will be one of the lasting memories from this year for decades to come.  Her was not going to reasonably compete for Best Picture, so the win in this category is almost as satisfying and well deserved.  Spike Jonze’s executed a most original, relevant, and resonant concept so beautifully. 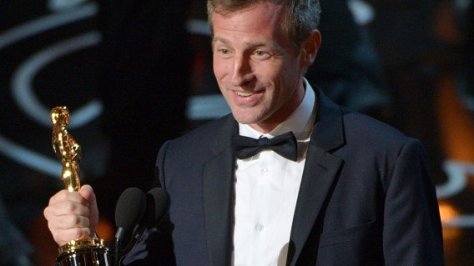 U2’s performance of “Ordinary Love”: First, I must provide some full disclosure on a few key points. Fact: U2 has been my favorite band for eighteen years.  Fact: It is a thrill to both see them perform at the Academy Awards and to have them be nominated.  Fact: I was not too excited about “Ordinary Love” for my first several listens.  Fact: If I had an Oscars ballot, I would have voted for eventual winner for best song, “Let it Go.”  Within this realm of objective (as possible) subjectivity, I thought U2 absolutely killed it.  Bono was as “in voice” as I have heard him over the last twenty years (well done on the falsetto, Mr. Hewson) and I appreciated the decision to go with the more acoustic version of the song that had been previewed on The Tonight Show starring Jimmy Fallon a few weeks ago (although without any QuestLove shout outs this time).  When those four men – Bono, Edge, Larry, and Adam – stepped forward to their instruments at the beginning of the performance, I was watching rock royalty personified. 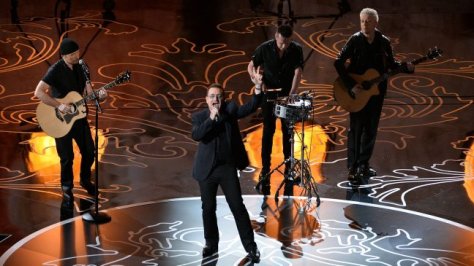 The presence of Daniel Day-Lewis: Speaking of royalty, it is always an honor and a privilege to see the best actor on the planet live and in person (at least through my television lens).  The announcement of his next movie role cannot come soon enough. 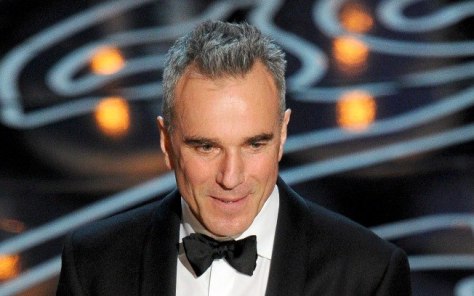 Almost all of Ellen: Hosting the Oscars is often a thankless job. Commonly, you are either at the center of the day after’s criticism maelstrom (as Seth MacFarlane and James Franco, more justifiably, found out) for a lackluster performance or you stay out out of the way enough to become irrelevant to the proceedings (Franco did a little of both).  Ellen, through her gracious, humorous, and infectious humanity,  managed to find a balance of involvement that fit well. Her monologue (with one exception noted later), devoid of “been there, done that” musical pageantry, had a “let’s do this” pop to it.  It was not as biting as Ricky Gervais at the Golden Globes, but equally smart.  It was not as dynamic as the Tina and Amy collaboration, but her obvious connection to the stars in front of her created a similar effect.  Most of her appearances the rest of the show involved improvised crowd surfing, the breaking of twitter, and pizza delivery and payment collection that effectively broke the tension and showcased how A-Listers enjoy pizza too (Marty Scorsese working with that pizza slice was everything). Even Harrison Ford seemed interested in pizza! 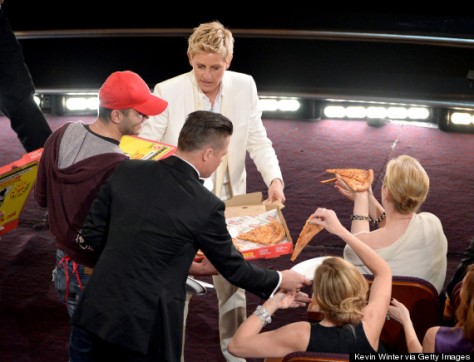 Idina Menzel’s performance: Sure, “Idina” may not be the easiest first name to pronounce on a first try, but I am not sure (more on this later) a full name could have been mangled more.  Idina, ever the pro, just went ahead and did this. 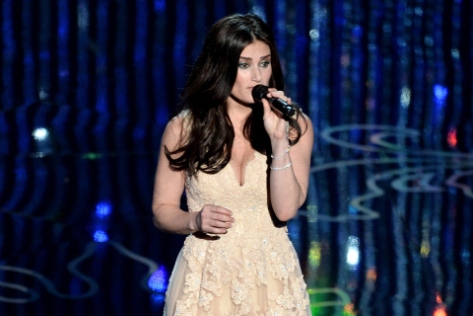 Social media during the Academy Awards: The power of twitter selfies and Billy “On the Street” Eichner: Social media has transformed many things (much is not for the better), but live events, particularly live events as big and universally watched as the Oscars, are much more fun with communal participation.  If you spend any time on Culture Challenged, you will be familiar with my adoration for the comedic genius of Billy on the Street and his twitter feed.  There is no better night of the year to spend with this magician of laughter than the Oscars.  Here is a sampling:

The best thing ever would be if instead of the Oscars the curtain goes up and they just do The Sound of Music again.

"Stop tweeting, you homo!" – text I just got from June Squibb

Great speech by Jared Leto but let me remind you: LIZA IS NOT PLEASED.

That is the first time Barkhad Abdi has heard The Wind Beneath My Wings.

JOHN TRAVOLTA WE ARE WAITING FOR AN EXPLANATION.

"No one gave me any pizza" – Barkhad Abdi

That Muppets commercial for Lipton: I am not a particularly passionate fan of Lipton Tea, but maybe I have to #bemoretea.  In one of the few television experiences that I still watch live, I was not able to skip over the commercials and last night, this was such a good thing.  I can’t wait for Muppets Most Wanted to open later this month, but for now, this Muppets commercial (In 2014! Everybody is talkin!) during the Oscars will have to do.

Leonardo DiCaprio lost Best Actor: 2014 is the year of McConaughey and I genuinely enjoy him and his performances, eagerly anticipate Interstellar, after a rough start, am totally drinking the True Detective kool-aid, and thought he was outstanding in Dallas Buyers Club.  In another year, I would have put my full range of support behind this native Texan.  Unfortunately, this year Leonardo DiCaprio gave the best performance of the year and of his career.  This was his year.  He should have won. 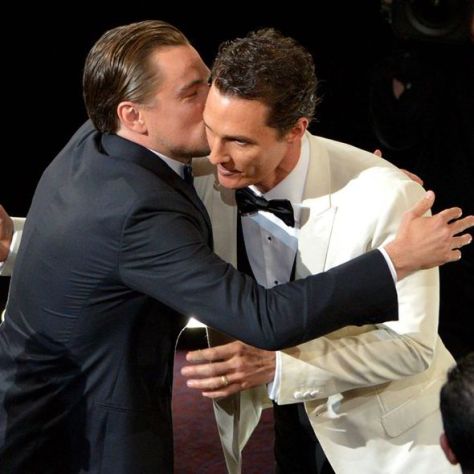 Ellen’s “sir” joke about Liza Minelli: Ellen referred to the person in the audience as a “Liza Minelli impersonator” and then said, “good job, sir.”  Liza and the audience had a reason to be uncomfortable. 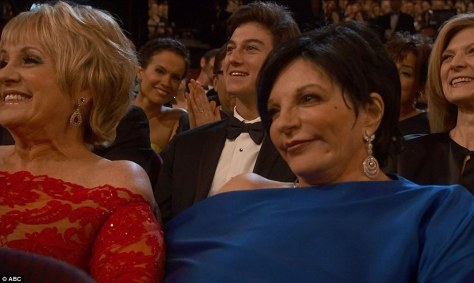 The return of Pharrell’s hat: This is what I tweeted at the time…

He cleaned up nicely after the performance, so Pharrell, why the hat?

Pink’s breathing technique: Voice teachers and students of voice teachers were distraught over Alicia Moore’s tendency to breath between words in the middle of verses.  I think Pink is incredible, but this vocal trope was a bit standoffish during the iconic “Somewhere Over the Rainbow.” 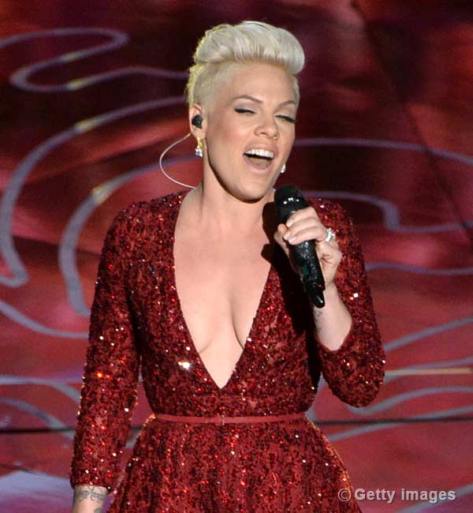 The Jimmy Kimmel sketch in the Oscars pre-show…about mean tweeters was just bad.

The energy level of Harrison Ford while presenting: It was just a little low. Thankfully, Ellen’s pizza delivery livened him up. 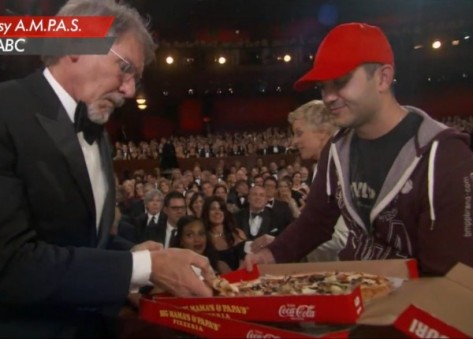 The John Travolta “Adele Dazeem” Incident: So this actually happened.

Bette Midler’s performance of “The Wind Beneath My Wings”: There is just a whole lot of emotion here after the in Memoriam segment.

The appearance of Kim Novak: Why was Kim Novak included this year and why was she linked to Matthew McConaughey?  I am so confused, and apparently, so is she.  You can’t write this stuff.

and finally Liza Minelli hugs Lupita Nyong’o: Liza is the just the person you look for when you win your first Oscar.