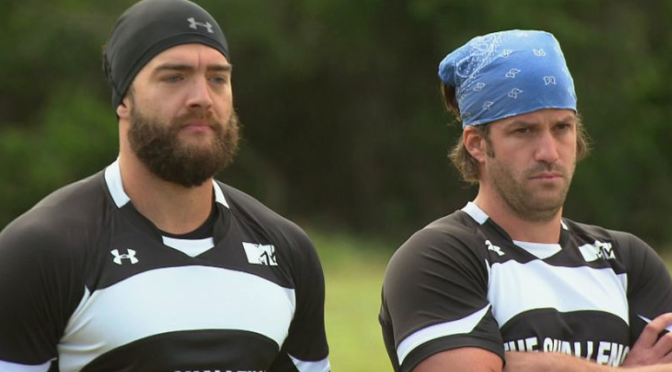 My few loyal readers (much appreciation to all of you) may have noticed that it has been a while since I last expressed my feelings in prose form on this season of The Challenge: Free Agents. Sometimes life has to take over (amazingly, there are some things that are more important than the fifth major professional sport although this is debatable) and for me, life just took over (you have no idea). With this week’s episode marking the penultimate episode of the season (this does not include the reunion), I couldn’t hold back any longer. A final elimination and the beginning of the final final deserve our fullest attention, so an appropriate time for a retro running diary it is. To prevent further unnecessary displays of mea culpa, let us begin…

10:01 – Where did we leave off from last week? Oh right – the Wrecking Ball elimination (this is probably the least compelling of the possible eliminations). For the men, it is Leroy and his recently elimination-tested self versus CT and CT’s beard. For the women, Laurel will compete against rival-turned bff-turned silent treatment partner Cara Maria, whose unlucky injury becomes even unluckier when she is asked to punch through drywall in order to remain in the game. Could The Challenge higher-ups have possibly audibled this one to an elimination in which Cara actually has a prayer? Quick side-note: you know that TJ Lavin the Great did everything in his power to possibly persuade such a change. For as much as he is blatantly intolerant of any form of quitting, his reverence for fighting through adversity, as Cara has done here, could not be any higher.

10:02 – Leroy refers to both himself and CT as “power players” in this game. There is are loud shades of Antoine Walker “perennial All-Star” lack of self-awareness going on here.

10:02 – Does CT’s form of focusing always have to be based on the “scare the video camera lens” technique? This is not a man that I would want to cross in a dark alley.

10:02 – Bananas gets the stakes: “There is so much riding on this elimination round. CT has been sent in…by me. And I know, if he wins, he will probably be coming back with vengeance.” CT with a vengeance? Yippee kay yay, indeed. 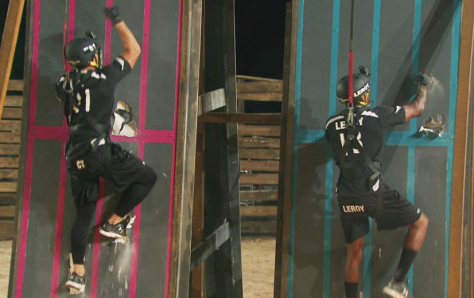 10:04 – Did CT just blink a message out to TJ Lavin the Great? It does look like this guy has plenty of gas in the tank.

10:05 – TJ Lavin the Great has something to say about Leroy. Sit down, relax, and let the wisdom of a master fill your hearts and minds: “All class. It’s easy to be gracious when you win. It’s real hard to be gracious when you lose. You’re gracious in both.” There is just so much mutual respect between these two and if Teej feels like Leroy left it all out there, then I will have to agree.

10:05 – When Cara promises that she will give “a million percent” even if she has to scale the wall with one hand, you have to take her seriously. What an amazing season she has had! 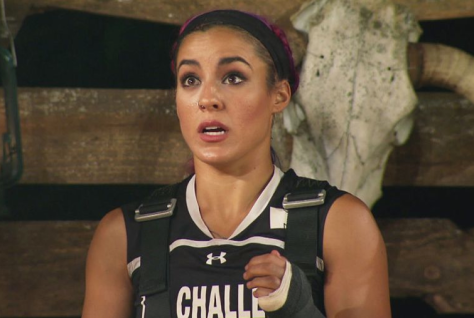 10:06 – Laurel’s decisive win (and she did dominate her performance) is lost in the fact that Cara’s left hand is in a cast. Again, could the producers have maybe mixed this one up? Their “let’s stick with the game plan” or “make bad and untimely decisions” approach is appalling and needs to go.

10:07 – Maybe in an act of editing room redemption, the true melancholy of Cara’s elimination gets its due. Shots of sad dejected faces from the admiring crowd, some great lasting Cara interviews, and a bittersweet semi-détente to the Laurel and Cara Maria dispute provide the makings of a worthy salute. 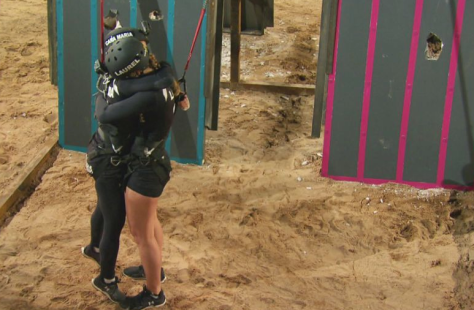 10:08 – Cara’s final interview says everything she is about: “Hand or no hand – like, this is not an excuse. I’ve just got to stay positive, man. I did my best. I’ve got nothing to be upset about. I just have to train harder, be stronger, and come back better. Hopefully I will get another chance to do it again.” Cara – I have a strong feeling you will get the invite.

10:08 – Teej announces that it is time to move to another location for the final. The location this time is the Andes Mountains or as Zach likes to call it, “Where?”

10:13 – Guys! It’s Nany and Theresa’s first location change! Celebration time! We will not even address Johnny Reilly who is still riding the “second time he ever got so lucky train” to perfection. Note: The first time? When Averey initially agreed to be his girlfriend. Since when was the second location a thing, anyway?

10:14 – At least Johnny has some keen insight on his incredible good luck: “I guess rookies don’t get to see this very often or come this far. So, it’s just an awesome feeling. Us eight morons are going to Chile.” Right.

10:14 – Bananas thinks Laurel handled the whole end of the Cara situation with grace and that karma will be on her side. It is hard to disagree. She is ready to ride this confidence and momentum into the final and, if I were one of the three other girls, Laurel’s continued participation would provoke nightmares.

10:16 – The cuddly beauty of the little Chilean lodge in the forest is overshadowed by a the can’t miss volcano in the background whose name in Spanish translates to “House of the Devil.” Ladies and gentlemen, we have reached the site of The Challenge: Free Agents final challenge!

10:17 – The four “lucky sons of guns” – Bananas, CT, Zach, and Johnny Reilly – enjoy a twilight hot tub on the eve of the final and discuss the endless possibilities of what they are about to do. A friendly handshake and a jump in the “ice cold pool” (CT managed to sneakily avoid this leg) set a perfect tone for the maelstrom of physical endurance to come. These are the moments that make The Challenge such a great viewing experience.

10:24 – “These cards are worth $125,000. And if you pull over the wrong one, that might have just taken that money and threw it right out the window.” Bananas is right. When you get this far (the final four!), arbitrary luck should not be this much of a determinant of potential success. I am NOT pleased with the MTV producers right now. Let the record so reflect.

10:24 – Zach and Nany both have some of the most amazing feelings ever when they turn over blank cards. Now at least CT and Bananas have to go into an elimination. Is that what you were really hoping for, Justin Booth?

10:25 – And of course, Johnny “I love the draw” Reilly pulls a blank card, sealing the fate of either CT and Bananas. I may have to turn this off in protest. 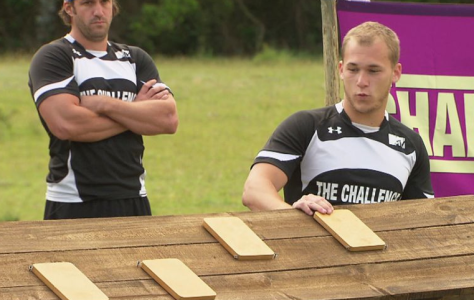 10:25 – Yes, Bananas. The CT and Johnny Bananas rivalry is “alive and well,” but it should have been played out on the final challenge, not because of some shameful and shady card flips. 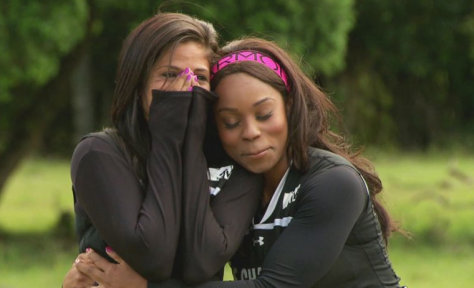 10:26 – To make matters even worse, the elimination is called “Puzzle Pyramid.” At least it could have been some kind of endurance based elimination as is often on this stage of the great game of Survivor. This is just another level of cheap. Poor Theresa is not the puzzle master and Laurel’s laser focus will be difficult to beat.

10:32 – Despite a late comeback (“Lock it down, Theresa”), Laurel’s robotic mathematic skills (or so Devyn says) triumph in the end. No knock to Theresa (After beginning on the basketball game with CT high note in the first episode, she had a consistently strong season throughout), thank goodness Laurel is in the final. At least there is some competitive justice. 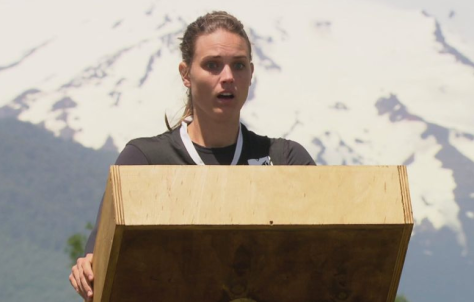 10:33 – The depressing piano underscoring set against Theresa’s departure speaks to my mood. This is a terrible way to lose.

10:34 – Zach believes that “you couldn’t write a better story” than a CT and Bananas match before the final. Let’s see. Let me try. How about a CT versus Bananas final challenge!

10:36 – I have never coveted a random commercial for a movie starring Eric Bana (Deliver Us From Evil) more. This puzzle elimination is all levels of pointless.

10:39 – Bananas wins! His joy is contagious as the weight of 10,000 volcanoes is lifted off of him. The legend deserves to be in the final, it just sucks that CT couldn’t be there to compete against him. 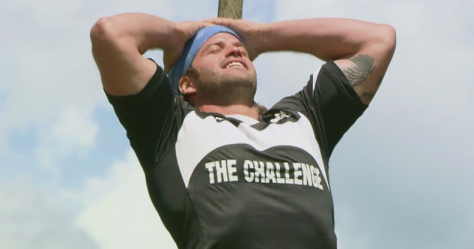 10:39 – TJ tells us that he is “sure we’ll see” CT in the future and CT promises to be back stronger and better trained on puzzles. In an episode filled with painful eliminations somewhat caused by producer tomfoolery, the news about CT’s future participation in this game is most welcome. CT, “try to bring it home for the vets, baby.” 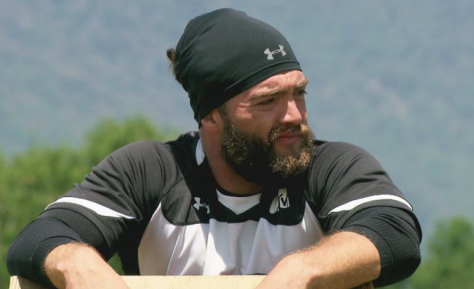 10:40 – TJ promises that the final will be the hardest thing they ever do in their lives and guarantees they will need all the rest they can get. Tomorrow is going to be real.

10:41 – Bananas and Laurel have one of those wonderful conversations about veteran things. I could watch an entire show of these snippets.

10:42 – The “House of Devil” volcano seems to be rumbling for an eruption, so there’s that.

10:44 – In true and beloved Challenge tradition, Johnny Bananas sets the tone in only the unique way that he knows how: “I think we are all going to die tomorrow. I think tomorrow is a good day to die, folks.” And then: “This is the culmination of weeks of pure insanity that has all come to this moment. The stakes don’t get any higher.” Drop. The. Mic.

10:49 – It’s final challenge time! Devyn has never been less excited to see TJ (“And some of you are good at the draw.” Shots fired, TJ). Either way, you can’t fake it here. TJ’s one guarantee is that they have never done anything “this difficult in their life before.” Summiting an active volcano seems to warrant such guarantees.

10:50 – The rules for the final challenge are little messy. There are five stages. The first three stages are done as guy-girl partners that will change each time (commonly referred to as the “everyone has to be partnered with Devyn” fairness clause). Stages four and five will be solo missions. The combined times of each stage will be added up for each player. The lowest guy and girl times are the winners of $125,000. Second place is $35,000. Third place is $15,000, but you have to finish in order to get the money. Oh, and the final stage will involve that awful volcano.

10:51 – Stage 1 is a tandem kayak trip down the river. Good luck, Zach and let us hope that Devyn channels her inner Pocahontas.

10:57 – Update from the kayak trippers: Bananas and Laurel are killing it in first place. Nany and Johnny are chugging along steadily. Zach and Devyn seem to be having some trouble. 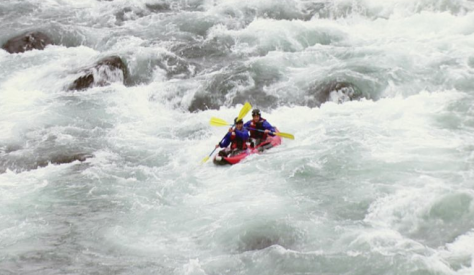 10:58 – Zach is hilarious: “Unfortunately Devyn this is not a date in Central Park. This is a competitive race for a lot of money. She is doing everything wrong and I am having a hard time staying calm.”

10:58 – Nany and Johnny’s kayak seems to have hit a few spin cycles too many before righting the ship. However, they remain entrenched in second place because… 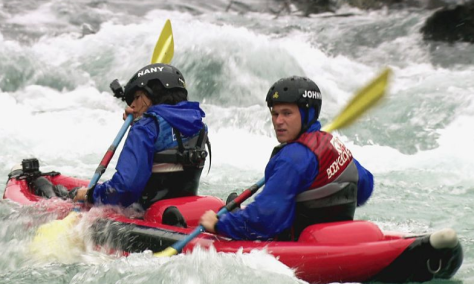 10:59 – …Devyn and Zach capsize! The Challenge Rescue Raft (where is the Challenge Doctor in all of this?) saves Devyn, but what about Zach? Is he going to be rescued? And, fade to black for now (spoiler alert: Zach gets rescued). The rest of the final challenge will have to wait until next week and honestly, I need a break from the illogical and disappointing producer decision-making. 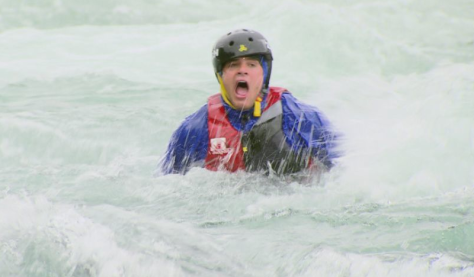