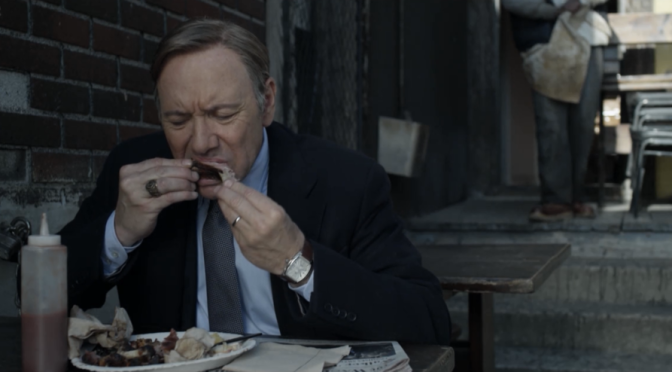 Although it took me nearly a month to even start season one of House of Cards after it had been made available last winter on Netflix, I finished in a forty-eight hour blur that left me as cold as Frank Underwood’s icy resolve.  I was enthralled by the concept (a limited series with excellent actors about the Washington D.C. political power brokers), appreciative of the episode ending cliffhangers that seemed to answer me the “It may be two in the morning, but should I just watch one more episode?” question, and genuinely enjoyed my between the beltway viewing experience.  David Fincher’s meticulous pressure cooking expertise and vision appreciatively enveloped all of season one (although he only directed episodes one and two) and set the tone for the series.  You quickly come to expect the unyielding tension underscored by Jeff Beal’s effectively ominous musical compositions.  You come to expect Frank Underwood consigliere, Doug Stamper (the underrated Michael Kelly whose delicate ruthlessness is one of the show’s highlights), putting out fire after fire with unethical abandon.  You even come to expect and begrudgingly appreciate the Kevin Spacey fourth wall demolition monologue motif that has become so synonymous with the show that it received satirical play at this year’s Golden Globes.

Unfortunately, after a few days of recovery last March, I thought less and less about House of Cards.  I am not referring to my opinion of the show (this remained high), but rather my after viewing consideration.  Season one did the job of telling its story well, yet, when you have consumed all of the meat off of Freddy’s barbecue ribs, the bare bones that remain are kind of useless.  This is not to say that every television program must answer a bigger, “so what?” question like The Wire does about urban societal decay or Breaking Bad does about the human condition’s monstrous frailties, it’s just that the conversation about House of Cards (and certainly the anticipatory hype of otherwise casual television consumers contributed to this belief) alludes to the idea that something greater is afoot.  I just don’t buy it.  House of Cards is more structurally and experientially the successor to 24 set inside the Washington’s power infrastructure than it is the successor to Television Golden Age prestige shows like The Sopranos, The Wire, or Breaking Bad.  Don’t get me wrong – 24 entertained me (most often through unrealistic, but reliable story moving plot twists) for four or five of its eight seasons, but beyond some haunting nightmares about Elisha Cuthbert and a cougar and Jack Bauer’s increasingly unsettling torturous tactics, there is not much to think about after the fact and a whole lot of unrealistic happenings to allow the story to reach its end point.

I went into my House of Cards season two experience with all of this in mind, but hopeful that stretching out the episodes over a longer duration of time could work to quell the relative empty impression left post season one.  I unpackaged my House of Cards vacation treat on Saturday, a day after the Netflix mass release.  Five days later, I now have four episodes left to watch of season two and although the jury is still in deliberation, things are not looking good for an acquittal.  There is a much talked about (six days is not enough time to let this cat out of the bag)1 scene in the first episode that was shocking upon initial viewing, but looked at in the greater context of the episodes that have followed, seems to have been all about storytelling convenience and not as much about storytelling enrichment.  Apparently, the character in question’s train had left the station (if you have watched, I am crudely and overtly punning), and, besides some unnecessary “C plot” cyber security tomfoolery involving what remained of this show’s fourth estate vantage point, this climactic gut punch (and it was!) doesn’t seem to be all that relevant.

Lost may be my favorite show of all-time, but I am not too obtusely immersed in Daniel Faraday’s mind to note that many episodes (Jack’s tattoos!), characters (Nikki and Paulo!), and even seasons (season two’s “tailies” business had no significance to the end game) had nothing to do with the completed story.  This is where House of Cards falls a little bit off the tracks.  Lost struggled in its middle seasons (and many, admittedly, would argue in its final seasons) because it was not aware of how long it was going to be around.  Once it established its end point, it found more focus (albeit in more of a supernatural kind of way).  Unencumbered by any television network’s system and business model and as the pioneer of original Netflix binge-worthy programming, House of Cards can operate on its own creative whim.  Why does season two feel so aimlessly redundant then?  How many machinations of the Raymond Tusk/Frank Underwood big gun arm wrestle must we watch?  How many times will a problem be solved by Doug Stamper’s magical tough guy softy influence, Remy Danton’s monetary brooding, or a Claire and Frank night run?  House of Cards moment to moment is effortlessly entertaining and quite enjoyable to watch, but my open questioning of its ultimate goal has begun to seep into the experience.  I am just not sure if I can trust that what I am watching, in the end, matters.

There is a scene in the ninth episode of season two (twenty two of the series), when (minor SPOILER ALERT!!!) Reg E. Cathey’s (of the late, great Square One TV) Freddy and Spacey’s Underwood have a conversation that ostensibly ends their relationship.  Freddy’s checkered criminal past has become a problem for Frank’s political present, so no more ribs for Francis.  I cared more about these characters in this scene, than anything that I had watched in season two up until this point.  Freddy’s daily ribs serving represented the next level layer of storytelling that House of Cards has only flirted with and one of the only relationships that I counted on to be sincere.  If the message of this show is that every relationship is a calculated weighing of the potential gain, so be it, but I thought Freddy and Frank represented something different.

In the end, Frank, as he always does, resorted to his influence, offering to pay for Freddy’s trying financial situation.  Freddy pridefully and admirably declines.  This leads to this exchange:

“If you change your mind, you let me know.” – Frank

“You was a good customer.  That was it.  You ain’t gotta pretend to be my friend.”  – Freddy

I will watch the final four episodes of House of Cards as a good customer should, but I am just not sure I will ever be able to consider it a friend.