Before yesterday, Christopher Nolan’s Interstellar had been cloaked in an introspective veil of plotted ambiguity and fantastical anticipation. Sure, there was this deeply moving yet enigmatic and largely indecipherable teaser about the pioneering destiny of humankind. Although certainly more than just alright (alright, alright), we only gained some awareness of the stakes (expectedly monumental) without learning a mere Hans Zimmer epic musical moan and groan about the terms of engagement.

This has now all changed. The newly released first Interstellar trailer paints a broad brush of its picture (I am sure Nolan has intentionally left out many of the finest details) and of Matthew McConaughey’s (the year of!) protagonist journey. Watch here:

As a true believer in the “In Nolan We Trust” school of cinematic consumption, I may refrain from future preview iterations in order to best preserve my mythologized first watch on opening night in November. For now, these slightly more than two minutes of content leave me delightfully content and give me the following beautiful nuggets to consider:

– I may need to sure up my Murphy’s Law understanding.

– Matthew McConaughey’s Cooper character may be a well-educated man and an engineer, but he is no trained pilot.

– In the world of Interstellar, the Earth has enough planes and televisions to match its desired inventory levels. Food is another story.

– Professor Michael Caine will ask us to confront realities about the limitations of our solar system. Cooper believes Nolan picture favorite Caine has a plan to “save the world.”

– “We are not meant to save the world. We are meant to leave it.”

– McConaughey’s Cooper will be back for his kids, but must go on this mission first to save them.

– “We must reach far-beyond our own lifespans. We must think not as individuals, but as a species. We must confront the reality of Interstellar travel.” Yessir.

My confrontation has officially begun. 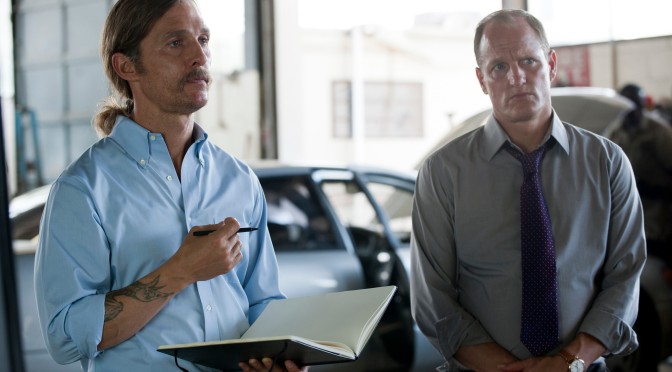 I watched the eighth and final episode of season one of True Detective this morning, twelve hours after the first airing.  True Detective, the groundbreaking (certainly in form – more on this in a bit) HBO series and the current holder of the “show everyone is talking about” championship belt (wrestled away from House of Cards sometime in the last three weeks), has slowly dug its aggressive nails into my blood stream of admiration and enjoyment.  As further indication of both its cultural impact and the rampant account password freeloading that is taking place within its on-line streaming paradise (of which I am an admitted transgressor – thank you, Dad), HBO Go literally crashed last night due to over use (the fact that Girls had one of its best episodes of the season last night certainly did not help), asking me and millions of others hoping to experience the final chapter in the Rust Cohle and Marty Hart saga to “try again later.”  This delay was perhaps a blessing in disguise, especially having watched the beautiful, but sensory overloaded series premiere of the new Cosmos right before I turned on my Apple TV HBO Go interface to indulge in True Detective.  Alert and with a rested mind, I sat down this morning to finish the story.

Much of the written word chatter on old reliables (publications like Entertainment Weekly, Vulture, and HitFix) last week was all about possible theories to the Yellow King “who-done-it” central mystery of this season.  Who was the Yellow King?  Were either Marty or Rust somehow involved in all of these serial murders?  What is up with the present day uniformed detectives that spent so much of the first six episodes listening intently to 2012 Marty and Rust wax poetic on a seventeen-year-old case and the minutia of their fated relationship?  Is there a reason all the facts of the case seem so hazy even after only seven episodes of content?  Honestly, I didn’t have time to spend culling through all of these case resolution theories, and admittedly, I didn’t really care.

I spoke to my Dad last night to try to make sense of it all.  On the eve of the final episode of the season, I had totally bought in to True Detective, but something felt so different than the other shows (and particularly central mystery experiences like Broadchurch) I have cherished in recent years.  My Dad’s admission, and subsequently, his implicit permission for one of my own, gave some perspective.  I am paraphrasing here, but my Dad said something like, “I really love True Detective – the direction, the actors, the characters – and you know me, I figure out what is going on, but Dave, with this one, I really have no clue what is happening and I am not sure it even matters.”  I now had permission to know that my appreciation for True Detective had nothing to do with my ability to follow any part of the central mystery that I freely admit had me completely lost.

(SPOILER ALERT!!!) When the closing scene between Marty and Rust at the hospital faded to dark, the light that my Dad and I thought we couldn’t see all season had actually been seen all along.  The identity of the Yellow King and the corruption that surrounded the eventual scarred face of the serial killing didn’t really matter to us viewers (even though his schizophrenic accents were of great intrigue).  The central mystery was just a device to tell the true story of these two detectives and because it was something they obsessed over, we were along for ride after ride, as ill-advised and remote as they often were.  All along, True Detective was always just about Marty and Rust and their internal battles between light and darkness.  One of the chattering critiques of this first season of True Detective was its surface level and often one-noted depiction of women.  I now get, as frustrating as it was at times, why this was a justified byproduct of a consummate adherence to the central conceit.  Our story was through the lens and into the depths of Marty and Rust’s eyes and souls.  Anything else, including woman that either informed them (as Maggie, reliably, certainly did) or informed us (Marty’s sea of affairs) about this light and darkness struggle, were there to support our understanding of the truth of these two detectives.

To rebuke some of the inevitable “that was it” backlash that comes from a mystery ending that didn’t matter too much in the first place, True Detective leaves three primary legacies in its high grassed swamps of Louisiana.  The first is in its storytelling form.  To set most of the story in three distinctive time periods, often without confirming the circumstances or solvency of the given truth, felt at times revelatory.  Lost played with this time period jumping trope, but eventually and disappointingly toward a science fictional end.  In contrast, for a while there, True Detective’s interest level stemmed from questioning the circumstances of the 2012 present (Rust Cohle beer can after beer can-crushing and all) set against the plot moving and “A story” 1995 past.  Maintaining this type of uncertainty about the show we were actually watching for most of the season gave each episode a burst of intrigue.

The second takeaway from True Detective, although at times leading to a restrictive tunneled vision, was the complete execution of a series by one writer and one director.  If you are to make me pick sides, I am more on Team Director Cary Fukunaga (not back for season two – the cinema is calling) than on Team Writer Nic Pizzolatto (back for more truth and lies in season two), but the consistency of this one unified vision certainly can be felt throughout the series (I think a few more idea cooks in the creative kitchen would have been of benefit, but the end result did by no means suffer all that much).  Like the now understood “a case study of two characters” was why to watch the series, Pizzolatoo and Fukunaga and their pursuit of greatness was why watching was so enjoyable.

The final lasting legacy of True Detective will be as a brilliant model for the ascension of the television medium through the casting and subsequent performances of its two lead actors, Matthew “2014: see the year of” McConaughey and Woody Harrelson.  It was not lost on me as I watched McConaughey’s gut-wrenching and flawless final monologue that I had just spent eight hours of television with the reigning Best Actor (I still think Leo should have won!) Academy Award-winner.  McConaughey and his inevitable Emmy win (a confident prediction on this March day) speak to how television gives to character and story in a way that film cannot.  Our relationship with Rust Cohl and Marty Hart over eight hours provides a different degree of depth and understanding.  I hope this more flexible forum (in terms of schedule) that True Detective pioneered for truly great movie actors like McConaughey and Harrelson to have such freedom to explore characters in a more meaningful way will set the tone for other future limited series.  For now, we can speculate who will fill the big shoes that McConaughey and Harrelson have left to a new set of season two lead actors and relish in the journey that was into the cavernous deep of Marty and Rust’s truth.  L’Chaim!