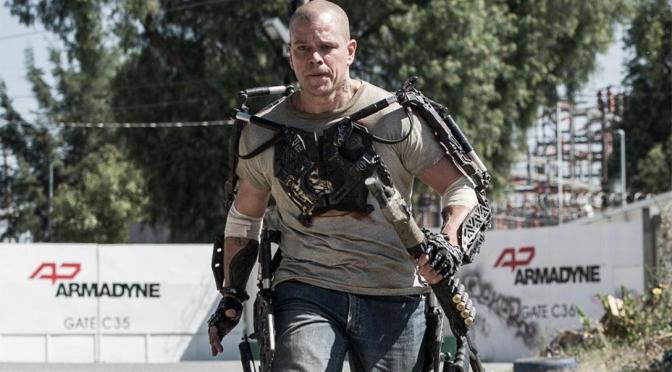 When I see a movie in theaters, I will write the five things you need to know about it.

5 Things You Need to Know About…

1) The 2154 world of Los Angeles and the space habitat, Elysium (the only settings of the movie) that Neill Blomkamp creates are as visually stunning and well shot as any movie I have seen.  Cameras effortlessly swoop in and out of environments like you are a passenger on the greatest helicopter trip you have ever taken or if you are on an actualized version of the great ride Soarin’ from the Disney Parks.  There is just so much visual detail and nuance to take in.  Many of the best movies that take us to the relatively near future have excelled at what the world feels like on the ground (Elysium does this effectively as well), but Blomkamp’s accomplishment here are his sights from a short distance above.

2) If Elysium had been released in 1983 or even 1993, it becomes an iconic science fiction motion picture in the vein of Blade Runner.  Matt Damon’s protagonist hero Max makes him an even bigger star (on the Harrison Ford mid-80s level).  Elysium Kenner action figures and playsets fill the aisles of Toys ‘R Us and Caldor.  Sharito Copley’s over the edge and over the top Kruger (despite a performance and character that takes a promising concept to an uncalled for extreme) is considered for a spin-off and given glorified villain treatment à la Boba Fett.  Perhaps muted in the over saturated destruction fest that has been the 2013 summer movie season and definitely muted in the current state of the international revenue focused modern cinema, Elysium in 2013 is a short-lasting August box office blip that never reaches its potentially potent cultural relevance.  It just fills a whole in the summer season between Pacific Rim and Kick-Ass 2 and will be soon out of both our collective consciousness and water cooler twitter conversations weeks before Labor Day.

3) Ultimately, Elysium’s failings are intrinsic to its form and the execution thereof.  What makes Elysium great – an engrossing near future interpretation of our world that further disenfranchises its citizenry by race, xenophobia, and class, the “haves” versus the “have nothings” – would have been much better suited for the crock pot marination of a television series.  Blomkamp creates a world that we want to spend so much more time in where we could have explored the vast story possibilities found within.  Unfortunately, the constraints of a movie and its need to create a more succinct central story damaged the ultimate result.  Once Elysium’s plot thickens, characters driven by honest and understandable motivations are thrown off the transport.  We are left with unnecessary violence, unnecessary violent verbal spewing (looking at you Sharito Copley and Jodie Foster), and a pace that ruins the enjoyment of the meal.  A television series of Elysium that crash landed into many different aspects of the segregated future vision that maintains Blomkamp’s exceptional visual mastery is an immediate success story that could thrive for many years over the course of many seasons.

4) Jodie Foster’s performance, character, accent, motivations, horrible overdubbing, and decision-making skills were the definitive low point of the movie.  It is an awful performance that gets more problematic as the movie continues.  Apparently, the original accent was too distinctively French (I would have been fine with this), so a new less pronounced addition was overdubbed over every line of dialogue.  Not only does what is said struggle, but now the how (both what you hear and what you see) becomes close to farcical, pulled from the worst Rita Repulsa scene from a Power Rangers episode.  I thought that after her speech Golden Globes, Jodie Foster had reached the hot mess apex for her 2013, but this Elysium performance has more than eclipsed any viewer discomfort from January.

5) Like District 9, Elysium is a movie that creates such a vivid futuristic world allegory that I could have spent many hours in it, digesting its story possibilities.  Unfortunately, the story chosen to support the less than two hour runtime of this movie is too sloppily plotted, leaves too many lingering questions, and requires too many leaps of logical faith to sustain its ultimate credibility.  Elysium is a movie based upon an incredible idea.  Blomkamp and his team chose the wrong story, mostly the wrong characters, and the wrong medium to present Elysium to its intended effect.